The last post left off in Dublin/Dunboyne; now it’s time to head north!

We enjoyed our last complimentary buffet breakfast and checked out of Dunboyne Castle Hotel. If we had stuck to the Fly & Drive package we purchased from Gate1 Travel, this would have been our day to fly home, but we decided to add on a few extra days to explore the northern region. Now that we were driving to Donegal instead of driving, we went ahead and added me as a driver (plus we had to extend the rental), which meant a short detour to the rental car place before hitting the road. 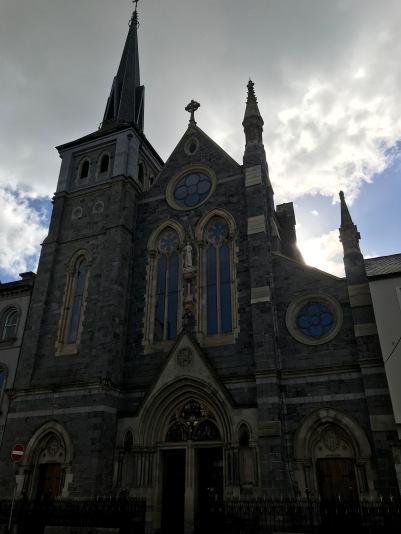 Google Maps told us that the most direct route from Dublin to Donegal would take us through a little bit of Northern Ireland. Since that means crossing into another country, we figured that would mean an experience like crossing the border from the U.S. to Canada or Mexico. We were prepared for a passport check, car search, etc. What did we end up getting? A sign letting us know that speed limits would now be in mph. I don’t even remember seeing a “Welcome to Northern Ireland” or “Leaving the Republic of Ireland” along the way. Talk about low-key haha.

Enniskillen is in Northern Ireland and was about our halfway point between Dublin and Donegal. It seemed like a good place to stretch our legs. We had talked about detouring to the Marble Arch Caves nearby, but we had gotten a later start than we intended, so we decided against it. We found a place to park and walked to the main part of town. Along the way we found St. Michael’s Church, which was beautiful, and we picked up some freshly baked bread and a few other assorted goods at Leslie’s Bakery. (The “sourdough” bread ended up just tasting like French bread, but it was tasty French bread.) 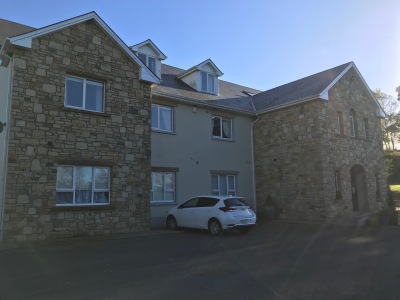 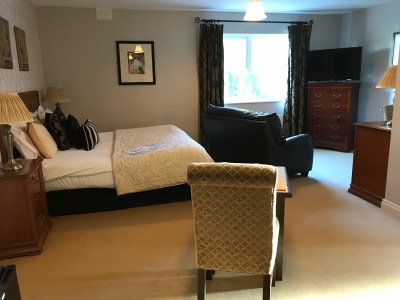 Once we got back on the road, we turned on the car radio for the first time. I really wanted to hear some true Irish music. We finally found a station that was completely in Irish, and I had to laugh when I realized that the song playing was Wheatus’ “Teenage Dirtbag” being sung in Irish.

Donegal Town is an adorable little town with a population of about 2,600. We were so excited to finally be far away from all the tourists and their gigantic tour buses! We arrived around 5:30 and got checked into Donegal Manor. I can’t recommend this place enough. If you’re ever looking for a place to stay in the area, you won’t be disappointed with this one! They offer baking classes if you contact them ahead of time, and the room was so spacious and comfortable. Of all the places we stayed, Donegal Manor offered the best value for your money by far. Breakfast wasn’t included with our stay (€10 per person), but we didn’t really mind because we just went to the Aldi in town and bought sandwich ingredients, since we already had fresh bread. Looking at a map from the hotel’s front desk confirmed our decision to drive to Donegal instead of fly: Donegal Airport is nowhere near Donegal Town–it’s about an hour north.

We had a low-key night because we were going to be hiking Slieve League in the morning. We thought we had a pretty good idea of what we were signing ourselves up for. 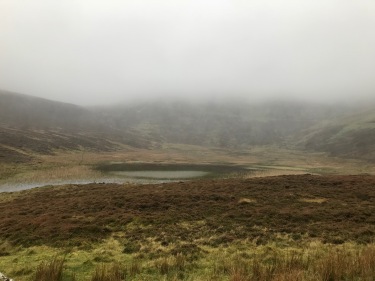 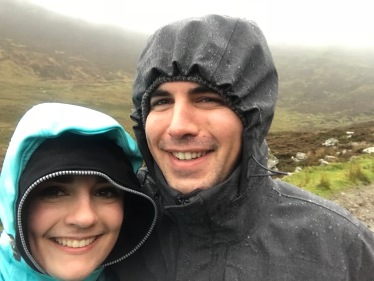 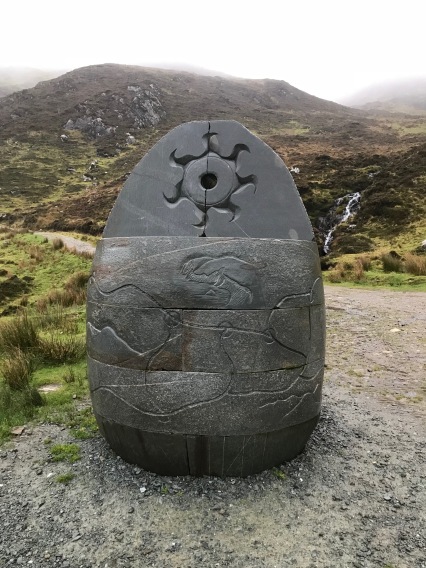 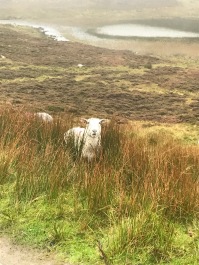 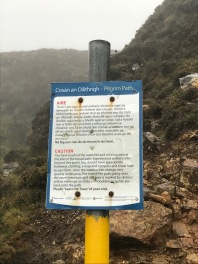 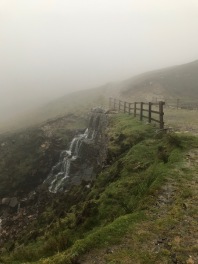 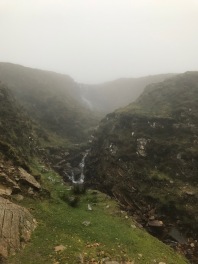 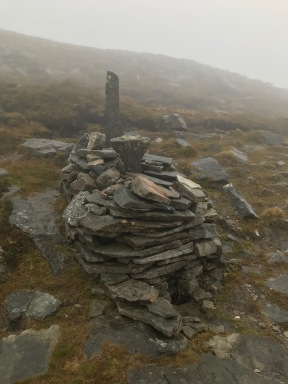 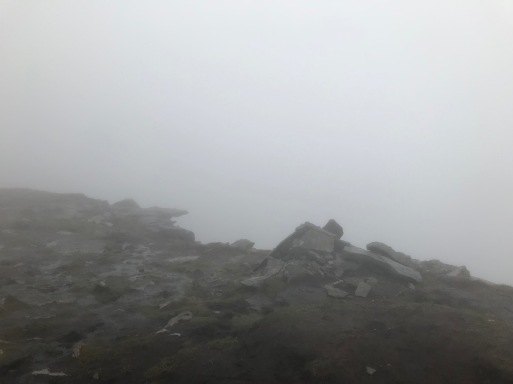 Slieve League is the less-famous sister of the Cliffs of Moher, but it’s 3 times taller (just under 2,000 feet), making them some of the tallest cliffs in Europe. When we were reading about it online the night before, we saw that there’s a shuttle on most days, a visitor center, a restaurant, and a fairly easy walk to the top. We plugged Slieve League into Google Maps and hit the road (it was about an hour from where we were staying.)

It was misting rain again, and as we got closer, the wind picked up, but with a shuttle to look forward to, we didn’t mind. We had our rain jackets and waterproof hiking boots, and we were ready to go.

The GPS led us to a cattle gate, which we passed through to end up on a one-lane road that wound part of the way up the mountain. The “car park” we found was basically just a sandy area big enough for maybe 4 or 5 cars to park. We realized at this point that the Pilgrim’s Path and the Cliffs Centre are nowhere near being in the same place (that’s what we get for not paying more attention), so we started walking. The road keeps going further up the mountain, but there’s not much space to park further up, and you eventually reach a point that no cars are allowed past. We were officially on the Pilgrim’s Path, and it was raining, windy, cold, and foggy. The trail was sandy but fairly easy until we reached a point warning that only experienced hikers should proceed. We figured we could handle it and wanted to get a good workout in anyway, so we kept going. We also were just too stubborn to not make it to the top.

After the warning sign, the path definitely changes. Instead of being a well-defined trail, it becomes rocky and uneven, with lots of muddy/boggy spots in between the rocks. Every so often there’s a rock or post that’s been spray painted yellow to let you know you’re still on the path. Despite the terrain, we saw sheep all over the place, which meant we also had to keep an eye out for sheep droppings as we walked. As we got higher, the wind got stronger, and the rain started to soak through my waterproof jacket. I also made the mistake of wearing jeans, so those were soaked. Jeff managed to step ankle-deep in a boggy spot, so his waterproof hiking boots now had water inside of them. We figured we’d made it this far, there was no point in turning back now. The wind was helpful when it blew at our backs because it gave us some momentum, but when it blew in our faces, that was less helpful. We finally reached the top, where the path ends. The winds were blowing so strongly that we had trouble standing still, so we didn’t get too close to the edge. Because the fog was so thick, we couldn’t see the ocean below. We could hear the waves and taste the salt in the air, but all we saw was fog, so it literally felt like we were standing at the edge of the world. It was breathtaking, despite the fog, and we felt really accomplished, but I wish the weather had been clear.

If it had been a clear day, we might have continued on to One Man’s Pass, but that will have to be for next time. We made our way back down to the car, and this time I managed to step in a boggy spot, so now we both had water in our waterproof hiking boots. Lovely. By the time we made it back to the car, we had hiked about 5.6km and were absolutely soaked to the bone. Jeff’s rain jacket had kept him mostly dry, but mine eventually couldn’t win the battle against the persistent rain. We both poured water out of our hiking boots before getting in the car. I don’t get cold easily, so in the 15 years we’ve known each other, this was the first time Jeff saw me truly teeth-chattering, full-body-shivering cold. He didn’t think it was possible haha. Our Slieve League experience wasn’t the adventure we expected, but it was a memorable one nonetheless.

Co. Donegal is located in a very large Gaeltacht region of Ireland, meaning that Irish is the predominant language spoken. After finishing our hike at Slieve League, we planned to visit the Glencolumbkille Folk Village, but it turns out that it’s only open in the summer and on Halloween. Next time. When we went to the town center of Glencolumbkille (“Glen” for short), it was pretty quiet. (It was a Sunday, so it wasn’t too surprising.)

We ventured into a pub hoping for food, a bathroom, and a warm fire, but instead we found complete silence. There were half-finished beers sitting on the bar, jackets hanging on chairs, but there wasn’t a single soul in the building. It was like the rapture had happened, and the silence was creepy. We wandered a few doors down to a small bar that was totally packed, and we could hear people singing at the top of their lungs. It turns out the local football team had lost a championship match the day before and were on a 2-day bender. They had been at the pub, but they don’t like the owner very much, so they just left (hence the half-finished beers). They were very friendly and welcoming, and they were eager to chat with us when they found out we weren’t locals. (PS: One of the songs they sang was “Teenage Dirtbag”–in English. Is this song still a big deal in other parts of the world?) Anyway, this bar didn’t serve food, so the football players recommended a place to eat that was about 10 minutes away in Carrick. If we weren’t so cold and hungry, we probably would have stayed and drank with them a while. They were a lot of fun.

The food at Hegarty’s was good, but they had fairy lights in their fireplace instead of an actual fire. Boo. We drove back to our hotel, and I’ve never been so excited for something as simple as dry clothes in my life! Later we met up with my friend Odette and her husband, Liam. I met Odette during my summer internship at the English National Opera during college, and we’ve kept in touch over the years. She and Liam live in Buncrana, which is also in Co. Donegal, northeast of Donegal Town. It was wonderful to catch up with them!

Afterwards we stopped by a place across the street to get some kebabs for dinner. So yummy! We took them back to our hotel and were glad to finally relax. We were exhausted!

Up next: Our self-created 1-day Game of Thrones tour through Northern Ireland!

If you’d like to be notified when new posts go up, please subscribe to Balanced Life Beauty.

This site uses Akismet to reduce spam. Learn how your comment data is processed.